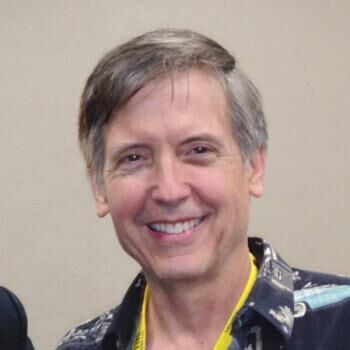 Gordon K. Smith is a Dallas-based writer, filmmaker, film historian, critic and lifelong movie geek with a BA degree from Texas Tech University. He was one of the first and longest employees of Blockbuster Entertainment, where, among other things, he wrote all those little blurbs on the back of the VHS boxes you took home. As a film/TV historian, he did research for the AMC Network interview shows “Reflections On The Silver Screen” and “Movies 101”, as well as documentaries for the A&E and Lifetime Channel networks. His work in reviving the 1962 cult film Carnival of Souls resulted in an interview on National Public Radio. The Lifetime Achievement video he produced for the actor Martin Landau was shown at Landau’s Hollywood memorial service on October 1st, 2017, and he was one of the filmmakers commissioned to create a segment for the KERA special Remixing the News. Gordon’s adventures in performing arts include being levitated on a couch by David Copperfield, three years as a late-night TV horror host in Fort Lauderdale, Florida, and a cameo in 2015’s Don’t Look In The Basement 2.