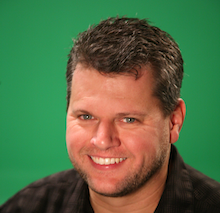 Eric began his film career at the early age of 13 when he decided to make a his stop-motion and live action epic trilogy “Killer Jell-o”, about a rampaging blob of evil Jell-o. He won various awards over the years for his short films, culminating in a Video release of his early works called “Explosive Shorts!”. While attending the University of North Texas, Jewell also started a video production company, specializing in commercials and corporate videography. AMS production Group hired Jewell as a Director of Photography, Director, Producer and occasional Editor. Over the years he produced videos for many fortune 500 companies such as Microsoft, Texas Instruments, EDS, Pizza Hut, Levi’s, and many, many more. He has won more than twenty industry awards such as the Communicator, Telly, Radio Award of Excellence, Katy, DV Award, Vision Fest Screenwriting Award and more.