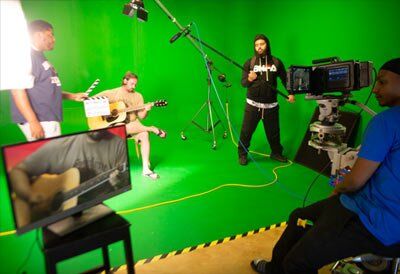 Students using one of MTI’s BlackMagic Ursa’s on a music video being shot in the Green Screen room. Using the NewTek Tricaster, the students can look at a rough composite as they shoot.

By connecting multiple JVC HD cameras to the NewTek Tricaster Mini, on-air talent can appear to be speaking from a high tech modern news set or be standing on the bridge of a spaceship. This gives our students a realistic ability and to learn live television and video production. The Tricaster and cameras are designed to be moved and used on any location required such as our Live Stage Room. The Live Stage Room is multipurpose room designed to especially for live music performances.

Class Rooms
Every workstation in our DFP classrooms is connected to the entire library of applications from the Adobe Creative Cloud. Along with permanently installed digital projectors, students have all the tools necessary to work on assignments as well as outside projects. 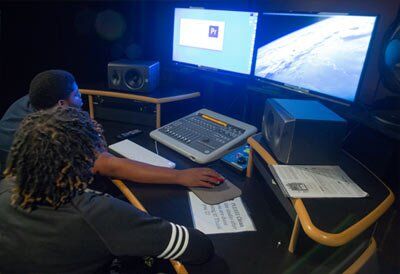 Edit 1 stays busy as Digital Cinema and Recording Arts students can collaborate on the short films produced by the Master Film Class.

Edit Rooms
Even with the classrooms having multiple workstations with both Adobe Premiere Pro CC and After Effects CC, MediaTech Institute – Houston has two dedicated Editing Suites. Both Edit 1 and Edit 2 are reserved as finishing rooms for many of MTI student projects. The rooms are also equipped with ProTools so that both DFP and Recording Arts students can utilize their knowledge in a cooperative environment.

Cameras and Other Production Equipment
MTI Houston’s Digital Film Program prides itself on its complement of state of the art film/video production equipment. We have over a dozen cameras from Canon DSLRs to TWO 4K BlackMagic Design Ursa cameras. Mounting these cameras on handheld gyro-stabilized rigs or our Hollywood, J.L. Fisher dolly complete with both straight and curved track, our students are taught how to add cinematic camera movement into their productions.

Both the LED and traditional halogen light kits along with a complement of C stands, flags, cutters, silks and gels allow our DFP instructors to give students a solid background in the importance of using cinematic lighting to shape their images.

At MTI Houston, we want our students to have as true-to-life experiences as possible so that they will be better prepared for their new careers in the film/video industry.